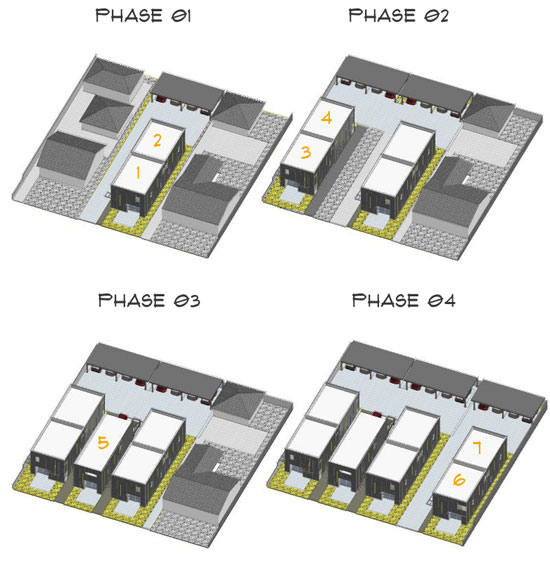 If you've been following along with us here over the last few weeks, you've surely noticed that we've been bashing open architecture competitions and even suggesting alternatives to these time wasters.

So you may find it a bit hypocritical that today I'm announcing that we won a competition. That is, until you note the following differences between this competition and a typical open architecture competition.

Not Just an Architecture Competition

The competition we entered was through the Urban Land Institute (ULI)  to develop housing for the chronically homeless. As I posted back in April, it was a team development competition consisting of other young real estate and social work professionals. Architecture was only a piece of the proposal. Our team had to find a property, create a program, design a project, determine the services offered, and develop a detailed pro forma of how the project would be financed. The process simulated a real project compressed into six weeks. 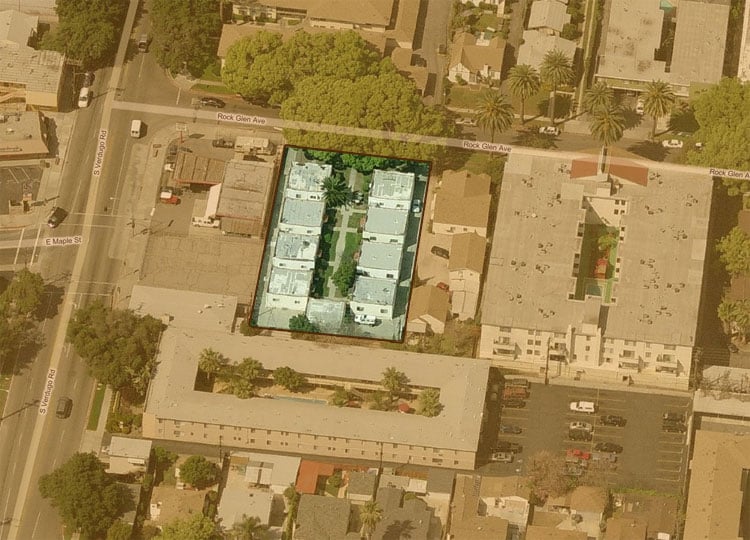 The site we selected in Glendale.

Our team had to apply in order to get accepted to participate. There were only five teams competing.

We even got to make our own cool logo. We were called Team HETED (Homeless Empowerment Through Efficient Development)

Each team was assigned a city to work with in Los Angeles County: Pasadena, Whittier, East Dominguez Hills, Long Beach and our sponsor city, Glendale. We also worked closely with homeless non-profit advocates and developers, Path Achieve Glendale and Path Ventures. The city and these organizations acted like our clients. By working with them we got to make real connections. Connections that could lead to future work. 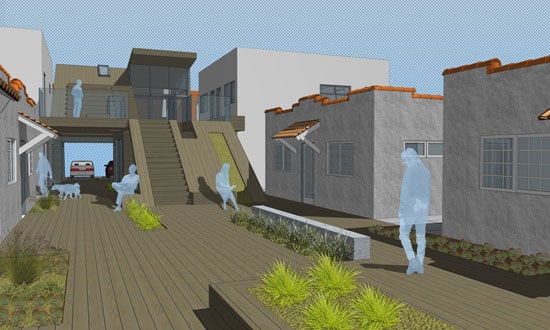 The project concept is a hybrid of preservation of 1920's bungalows and modern intervention of adding new elements to bring the project up to code and provide services for the residents.

Our team really enjoyed working with each other on this. I think we will collaborate again on future projects.

The Urban Land Institute is a diverse organization. It reaches all types of real estate professionals. We prefer this type of exposure over showcasing our work to a bunch of fellow architects. 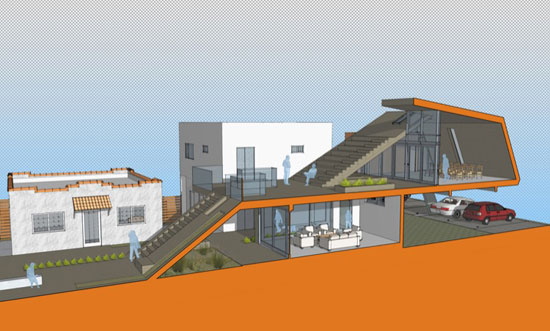 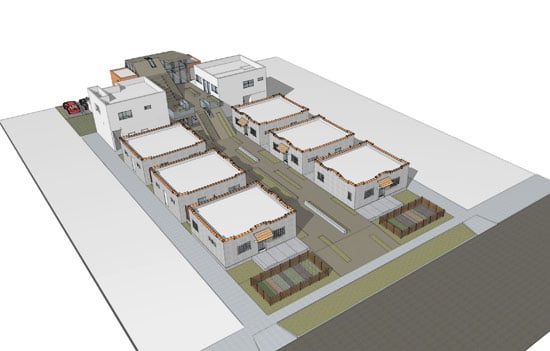 Overall view of the project

Whether or not you buy our arguments for entering this competition, I encourage you to check out our winning proposal. You can also view our online press release.

What do you think of our proposal?

We have recently added a few pages of dedicated Small Lot Subdivision Information to our site.

Small Lot Subdivision is an ordinance in the City of Los Angeles that allows you to subdivide lots into small residential parcels (as small as 600 sq. ft.) for the purposes of devloping fee simple housing (meaning you own the land your home sits on verses a condo where it is tied into a home owners association.)

If you have any questions about Small Lot Subdivision, please don't hesitate to contact Modative. The code is a bit tricky and we feel that we have learned a lot about its intricacies by going through the process on a few projects.

After months of design and tract submittal preparation, here is a glimpse of our latest small lot subdivision project here in Los Angeles. This project, called the Fay Avenue Art District Dwellings, is only two blocks away from our Venice Boulevard small lot project. This design for these seven homes is inspired by the growing art district in the area. 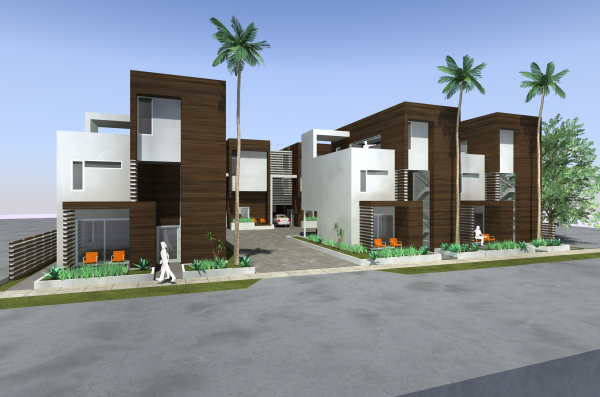 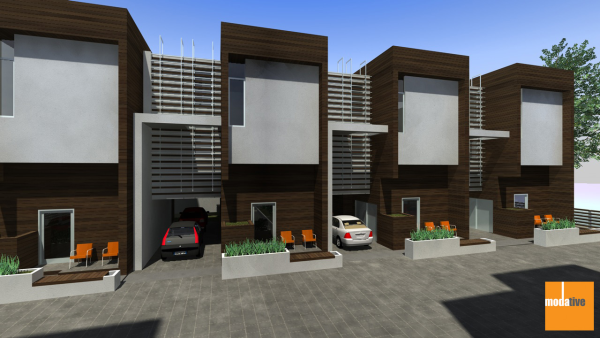 Fay Ave. Art District Dwellings is currently in design development and will be posted to the website in the coming months with more images. 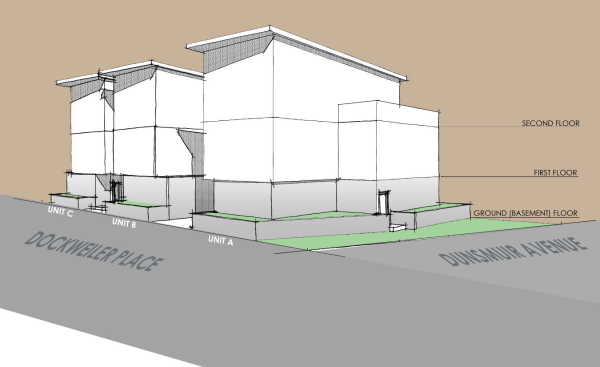 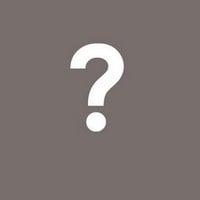 For those wondering what Small lot Subdivision is, I have reposted some info on this (relatively) new Los Angeles Ordinance below.

Los Angeles has a housing shortage. More specifically it has a shortage of affordable housing. During the latest housing boom, housing prices rose at a dramatic rate, putting home ownership within Los Angeles out of reach for many.

To address these and other housing issues, the city of Los Angeles implemented the Small Lot Ordinance in January of 2005. This innovative ordinance allows developers to subdivide land into smaller lots then previously permitted, providing new types of (fee simple) ownership housing for LA.

At Modative we are dedicated to developing an expertise on this new type of development. We developed the following chart outlining the benefits of this code. 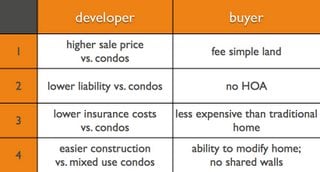 My Brother in The New York Times 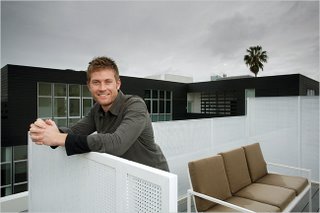 My brother, the developer (Grant) is in the New York Times today. The photo above is from the article.

Lorcan O’Herlihy (Architect) and Richard Loring (Developer/Builder) did a nice job with this project; another example that there is still quite a market for modern multi-family housing in Los Angeles.

My brother/Pacific Beacon Properties, LLC and Modative are currently developing/designing a six-unit housing project on Venice Boulevard here in Los Angeles utilizing the new small-lot subdivision ordinance. Even with the current housing slow down, we are enthusiastic about the future of these type of developments.