Development Fact of the Day - Dubai

"In the six years since the Twin Towers fell, a thousand skyscrapers have been rising on the Arabian Gulf." 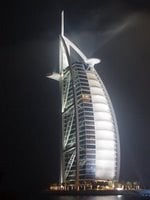 The UAE (United Arab Emirates) is growing fast. Nowadays, Dubai is considered to be at the forefront of this building boom, developing at a breakneck speed that is hard to ignore. This enthusiasm for development is overwhelming and the barriers to "getting things done" seem minimal compared the lengthy processes that developers often endure here in the U.S.
-
The next decade will be very telling as Dubai and other Emirates showcase their economic growth in this very tangible way - real estate development. Hopefully the freedom that Architects and Developers have in this region will lead to real innovation that goes beyond pure spectacle. Dubai is an opportunity to address multiple environmental, social, and urban issues with built examples - projects that are both beautiful and responsible.