A Modern Remodel in Long Beach - The 360 House

The famous saying is often linked to the architect Ludwig Mies van der Rohe, and drilled into every young student immediately after walking into the confines of just about any architecture school in the United States. It is an important idea, but one  overlooked (for unknown reasons) by the previous owner and builder of our client’s residence in Long Beach, California. 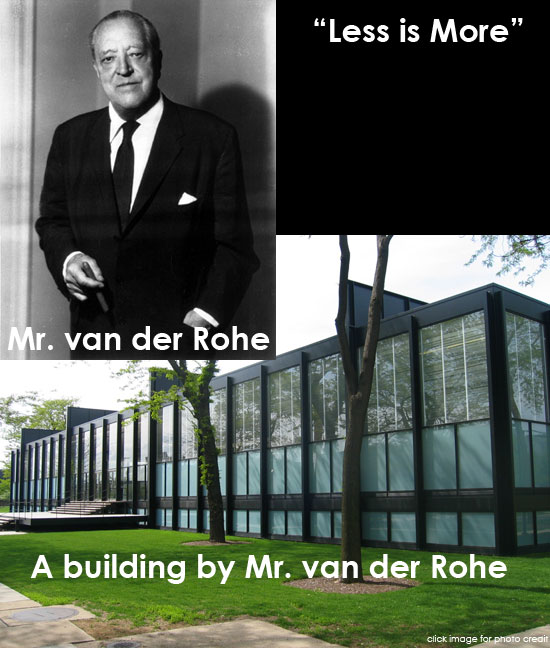 Fortunately for modative, our client’s goals were perfectly aligned with this famous motto when we were asked to collaborate on a significant remodel of their single-family residence. "How about  'less' of just about everything?", our client asked. Less maintenance, less underutilized bedrooms, less underutilized space, and definitely less terracotta Spanish tiles.

What better way to start practicing Mies van der Rohe’s theories on minimalist architecture than to strip away the out-of-context Spanish tiles that adorned the top of the even more meaningless Mansard roof. Yes, that’s right, I said it... a Mansard roof: a hip-style roof first popularized by French architect Francois Mansart who died in 1666!

Oh and lets us not forget, later revived by famous fast food chains Pizza Hut and McDonald's. Well, since our client wasn’t interested in franchising these popular establishments, and since Long Beach is really, really far away from France and the 1600’s, the roof was the obvious place to start. At least on the outside... 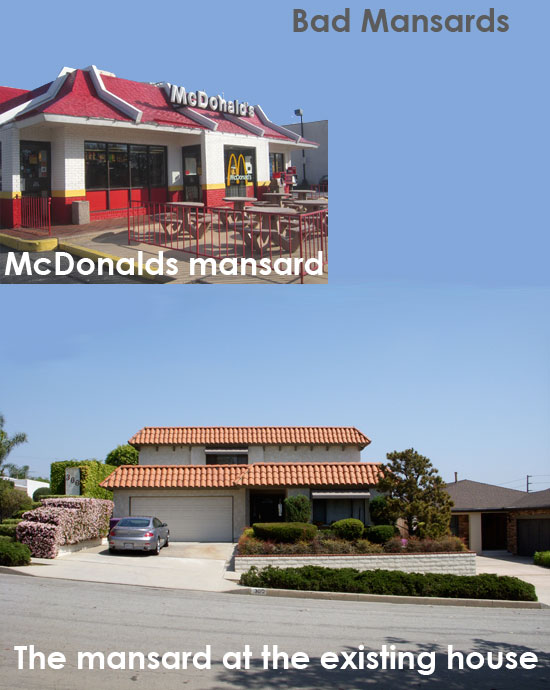 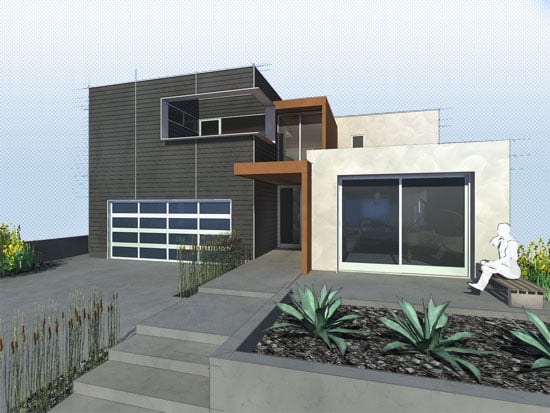 The 360 House with a redesigned roof line (view from street)

After redesigning the roof line, and adding a much more desirable (and functional...) Master Bedroom Suite, a thorough examination and reworking of the interior spaces was next to be considered.  Inside, there were too many bedrooms underutilized since the kids had left the house. So recognizing the entrepreneurial spirit of our clients and their much-deserved desire to work more from home, a new work and loft space was created by combining the upstairs bedrooms and transforming them into the central focus of the expanded interior space. 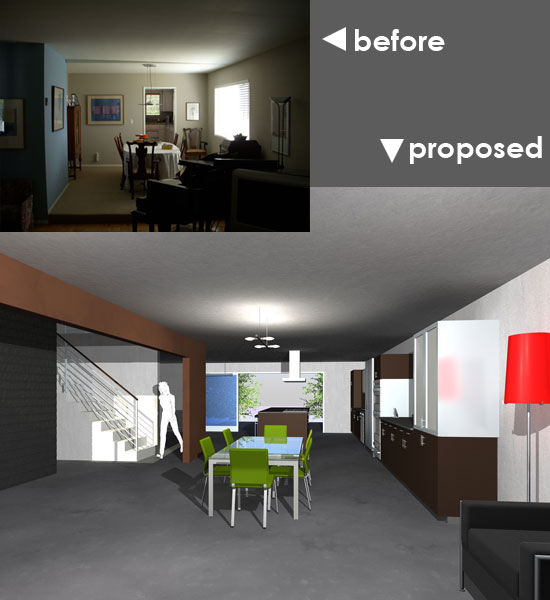 On the ground floor, we removed  just about every interior wall (less compartmentalization ), and provided more of a connection to the outdoors by opening up the back wall to the large rear yard and newly proposed patio, pool, spa and garden.

The 360 House - Back yard with new pool and terraced landscaping 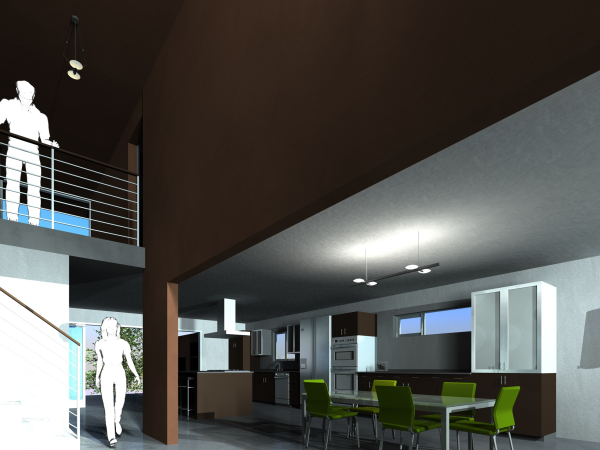 The 360 House - Adding volume to the interior

The 360 House will begin construction in Fall 2009. For more on this project, including a project blog, check out the 360 house project page. 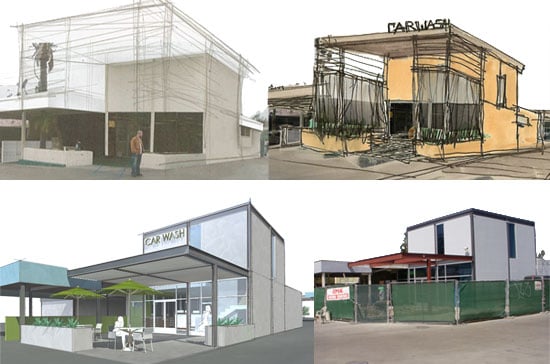 The Fashion Square Car Wash remodel is a project that we've had in our office since early 2007. And just as the real estate market has transformed so much in these last few years, so too has the scope of this remodel fluctuated from medium to large to small; finally landing back at a happy medium.

We thought there was value in sharing this architecture process with you. So, instead of the typical approach of only showing finished project photos, we decided to provide a deeper look into the project - from concept to construction and, finally completion (in August 2009). 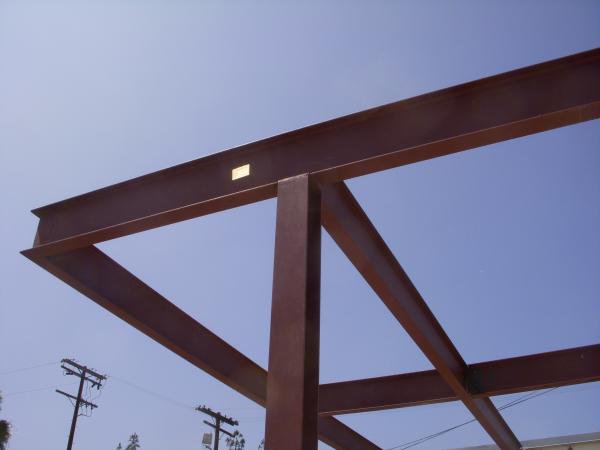 In the next few months, we're going to go back through our sketches, drawings and construction photos and post the process to a project blog. Although the blog is still being completed, we're off to a good start.

Over the last few days we've been in the process of selecting colors for the interiors of the Fashion Square Car Wash project. While early interior renderings featured colors that were primarily placeholders, now that construction is underway, the time has come to make a final decision. Something that architects often like to avoid.

A Concept for the Colors

As is typical in our work, instead of just picking something that "looks good", we strive to find a deeper meaning or concept behind the design. Since the project is a remodel, we decided to let the original building and its history be our guide.

Since the original modern steel structure was built sometime (we think) in the 1940's, we started to investigate what colors were common at the time the building was constructed. Off to google we went in search of mid century modern architecture colors. Interestingly enough, we found many great examples of popular mid-century color palettes. Two of our favorites are below, showing some of the possible options we are considering: 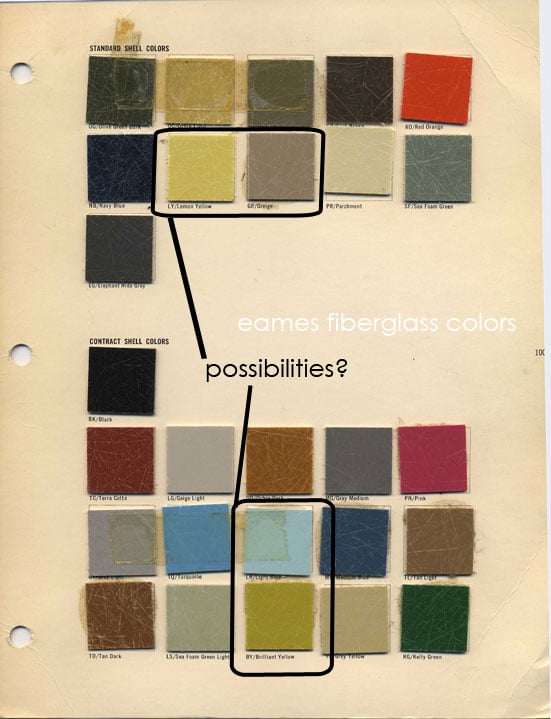 Eames fiberglass colors used in their ever popular furniture. 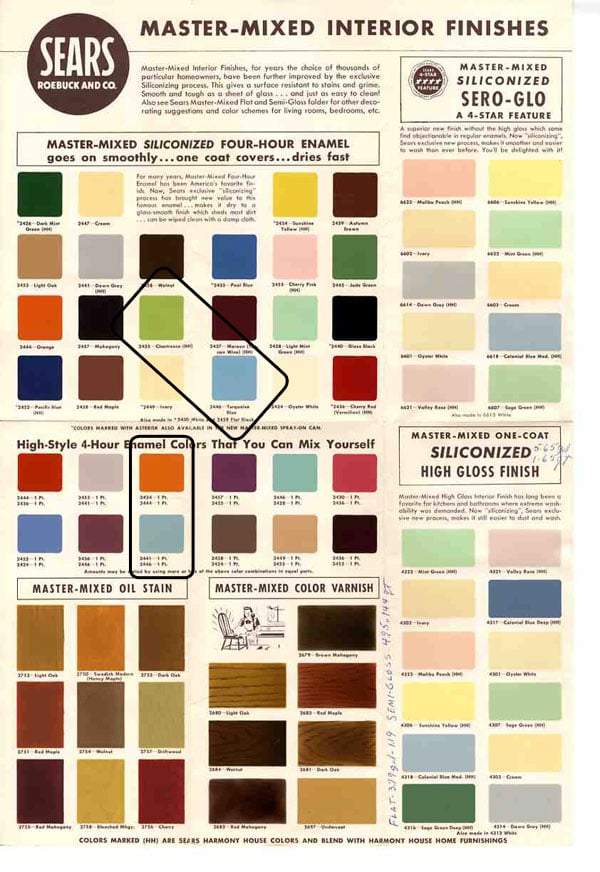 We also actively searched Eichler homes and other mid-century modern examples. Many of the colors pallettes we found from this era contained our preferred colors. Although this is a small exercise in selecting color, we felt it was important enough to search for precedents behind these selections. The goal is not to copy mid-century modern design exactly as it was when constructed, but rather to understand the history and reinterpret these concepts for today's modern world.

We should have a decision on these colors in the next week and will post some renderings not long after.

The Case for Modern Architecture

Last week at a small ULI meeting I gave an informal presentation on our firm. The presentation was simple; our story, philosophy and a review of a few projects. In a brief Q & A afterward, I was asked a common question: "why does your firm only do modern style work?" I love this question because I feel the answer really defines who we are as a firm.

The first part of the answer is that I don't really consider "modern" to be an architectural style, but more of a way of thinking. So in the simplest terms, to us, "modern" means designing and thinking that are of our time and place.

Example of designing for a place: The Perry Residence - designed for one of the rainiest spots in the USA in Kauai, HI.

So are there stylistic choices we make in our work? Yes, of course, but the primary goals of all of our designs are to relate to their location and to utilize the best available technologies today to make them more efficient and environmentally responsible. Last and definitely not least, our architecture has to relate to the people that will use it in these fast changing modern times.

So, last weekend I finally* started reading The Perfect $100,000 House by Karrie Jacobs, and already I discovered a great little blurb on "modernism" in the introduction. It's a definition that is very appropriate in explaining the type of modernism we strive for here at Modative. She also manages to define it such an eloquent way that I've never been able to. This, however, may have to do with the fact that she is she's a professional writer and I am, well... not. Anyways, here it is:

- "The modernism that I love, that I care about, isn't a historical movement that peaked in the  mid-twentieth century and is currently enjoying a major revival but is rather a frame of mind. It's a way of thinking that involves an ongoing investigation of methods and materials. It's a design philosophy that values comfort but doesn't confuse it with excess. It's a strategy that views the most important elements of design as space, daylight, and the surfaces with which we routinely come into contact."

- Although I'm a painfully slow reader, and it may take awhile, I'm hoping the rest of the book is this insightful.

- * I say finally because I talked about this book last April in our news section.