On October 17, Modative was fortunate enough to be featured in a Fox News National TV story on small lot subdivison in Los Angeles. Christian and I really enjoyed spending several hours with producer Laura Prabucki and her team, touring a few of our projects and conducting interviews with the two of us as well as a few of the residents that live in the projects we designed. 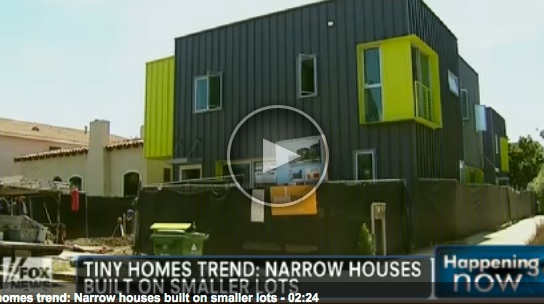 The story isn't really about architecture, but rather the larger impact that this trend has on society and the economy. We were really happy with the final cut and are thankful to the the residents that made themselves available for tours and interviews. The story was featured on Fox News (national) several times on October 17 and has made a few appearances on local news affiliates around the country. If you weren't able to catch it on TV, click the link to watch it online - Tiny homes trend: Narrow houses built on smaller lots

Projects featured in the story include 726 California Ave (project in the opening live shot in Venice), Cullen Street Homes (project with the open wood stair in the living room) , Fay 2X Homes (interior shot above) and Fay 3X Homes (project under construction in the video).